Holidays aren’t really my forte. There’s always been a little part of me that envies the fact Karl Pilkington was discovered instead of me, though I then think of all the places he travelled for An Idiot Abroad and think I did well to avoid the hassle.

Yesterday we arrived back from our first family holiday – a week in the ‘quiet’ bit of party island, Ibiza.

It was well past 1am when we made it out of the Gatwick terminal. After discovering our buggy had been left behind for an extra day in the sun, both Albie and I sounding like we’d contracted the pneumonic plague and popping ears leaving me partially deaf, I admit wondering whether it was all worth it.

But after a good night’s sleep and an evening flicking through hundreds of holiday snaps, it’s clear – as well as a brace of hacking coughs – that we achieved our goal.

While it’s unlikely that Albie will have vivid memories of his first foreign foray, the pictures prove he had an amazing adventure. That’s what counts – though I’m sure all of us had many memorable moments.

On the face of it, the holiday could have been a recipe for disaster. We set off as a group of ten, including Albie and our three-year-old nephew, Henry. Combine a big Christmas-style gathering with pressure-cooker Balearic heat and most family units would expect a few Eastenders-esque dramas.

Despite the potential of taking a seven-month-old baby half composed of genes which expose him to melting in high heats and a toddler who insists he is the only one in the hotel authorised to press the lift buttons, I think we made a successful stab of it.

Albie rose to the occasion better than Daddy, who started solidly and then ran out of steam towards the end as the relentless rays took their toll.

Our first-time flyer negotiated his first plane journey with ease, to the relief of us and our fellow flight friends. I’ll have to mull over tips for that one but I suspect they key was luck!

As the week progressed, I began to wonder if he’d spotted the smiley face on the side of our Tui transport, tried to impersonate it and the wind had changed. His wide, cheeky grin is as constant in our pictures as his Daddy looking a tad overheated.

I’m not a seasoned traveller but my understanding is that all-inclusive hotels often fall short when it comes to food. Before Albie arrived, a trip to the buffet restaurant in Egypt one year most definitely fell into the category of ‘hmm, perhaps we’ll stick with chips again’.

But to the credit of the Sirenis Cala Llonga, the food was excellent. I struggle to comprehend some of the negative reviews of the cuisine on TripAdvisor. To the naysayers, I simply say that dairy-avoiding Albie had the best seven days of eating he’s ever had, so stick that up your jacksies! 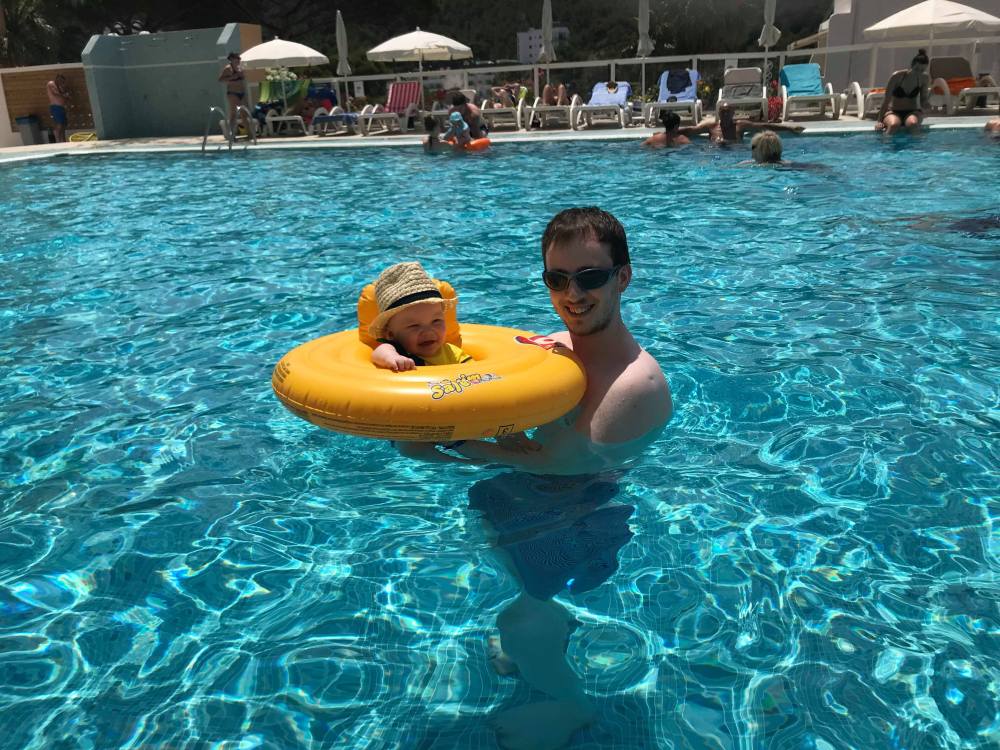 Equally, the evening entertainment received the full seal of approval from young Henry. His unbending energy and non-stop grooving to everything from cheesy dance routines to the Four Tops (who?!) tribute act left us wondering if we’d strayed away from the quiet side of the island to party town.

Albie has an endless supply of snaps to tell the tale of the trip but when he grows up, it’s his cousin who will have the bragging rights. Getting a high five and fist bump for his efforts from the Tops was cool enough – but it was the one-on-one jive with a glamorous girl from a visiting troupe which made him the envy of all the chaps in the resort!

My one criticism of the Sirenis was a lack of fancy toiletries or fluffy slippers for us to pilfer – but if we could have fitted their cot into our suitcase, we’d have gleefully done so as Albie slept six nights out of seven in it. Remarkable – and let’s hope we can keep up the trend and introduce him to one of the two home beds he’s yet to properly meet.