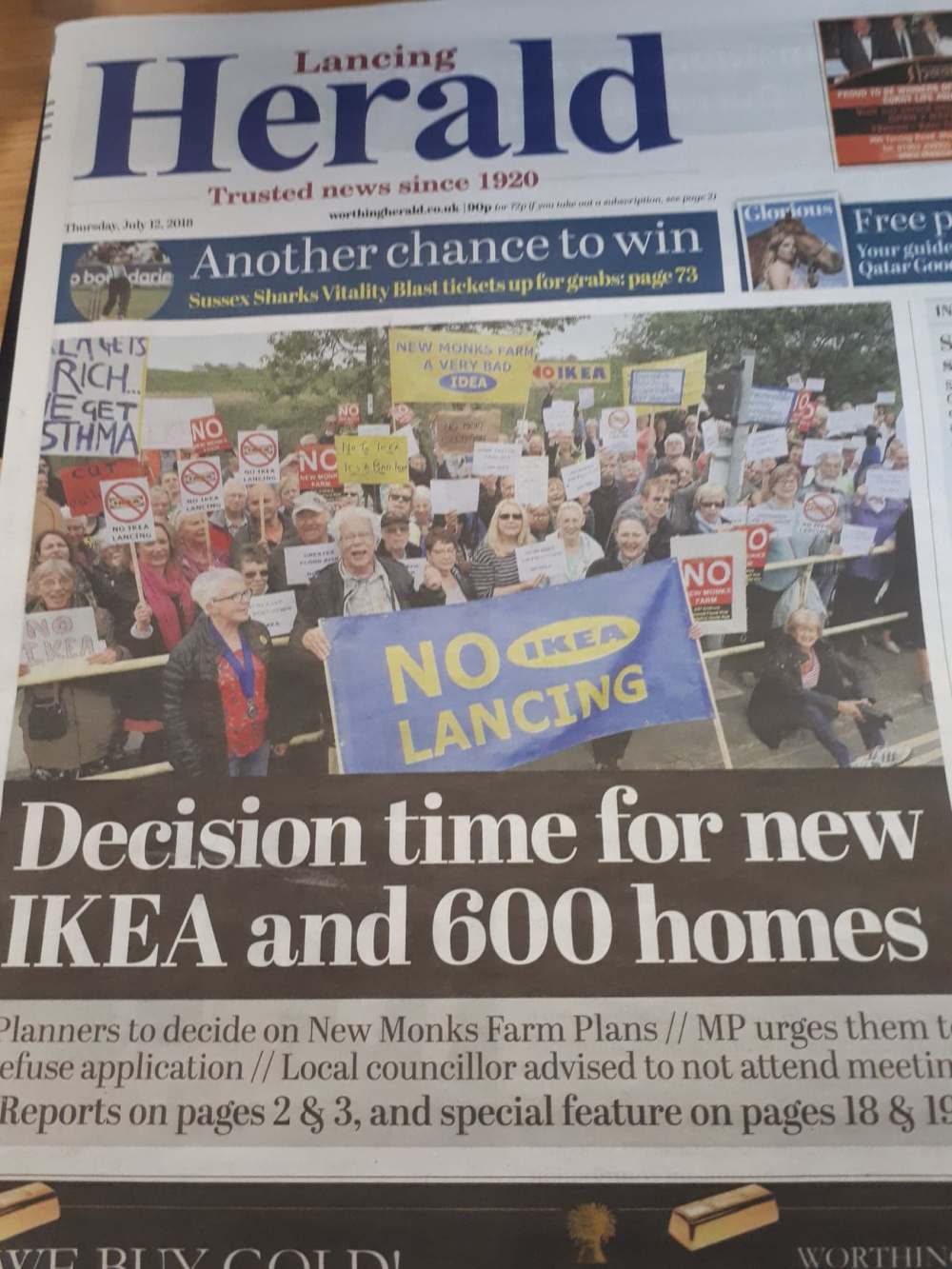 When I told colleagues I’d voluntarily spent Wednesday evening at one of the biggest council meetings our area had ever seen, I’d not seen as many bemused faces since the week before when I walked home from work, forgetting I’d driven in.

The vast majority of the hundreds of meetings I’ve covered have been spent on my tod in the public gallery. There are a few lively exceptions, while council-observing machine ‘Mr H’ always doubles the numbers in Adur.

The lack of engagement is understandable. We all live busy lives, not least those of us with attention-craving mini people.

But I fear this leads to real problems when massive developments like IKEA – subject of Wednesday’s gathering – come along, smack us in the face and compel hundreds of us to sit up and take notice. Click here for the background.

Lack of attendance, lack of understanding

Given my experience, I think it’s fair to say many of this week’s attendees may never have been to such a meeting before.

Lots of those who had penned passionate objections and signed petitions may well have done so for the first time.

Generally speaking, anyone who who has commented on a planning application will probably be new to the process – and if they’ve never attended a council meeting, how are they meant to know how the system works? 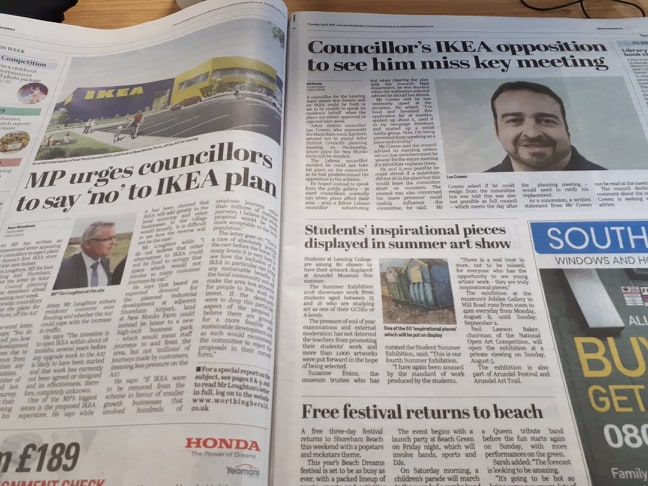 ‘Listen to your residents’

Common things I hear include pleas for councillors to ‘listen to your residents’, ‘the people don’t want this’ and ‘everyone hates this development, it must be rejected’.

If planning was like any other political decision, those comments would be perfectly reasonable.

Yet an objector going into a planning meeting with that mindset is likely to come away feeling frustrated and unrepresented.

Why? It’s because our system isn’t always ‘fair’

Our planning system is based on a load of rules and regulations, set by the Government. Amid a housing crisis, I’m afraid the priority is on building and the guidelines our local councillors follow when making the decision weigh in favour of finding a way to approve things, not reject them.

The process is perfectly open and democratic. We can raise objections, speak at meetings and watch the decisions being made – but it would be wrong to suggest Joe Public holds the balance of power when it comes to the crunch. 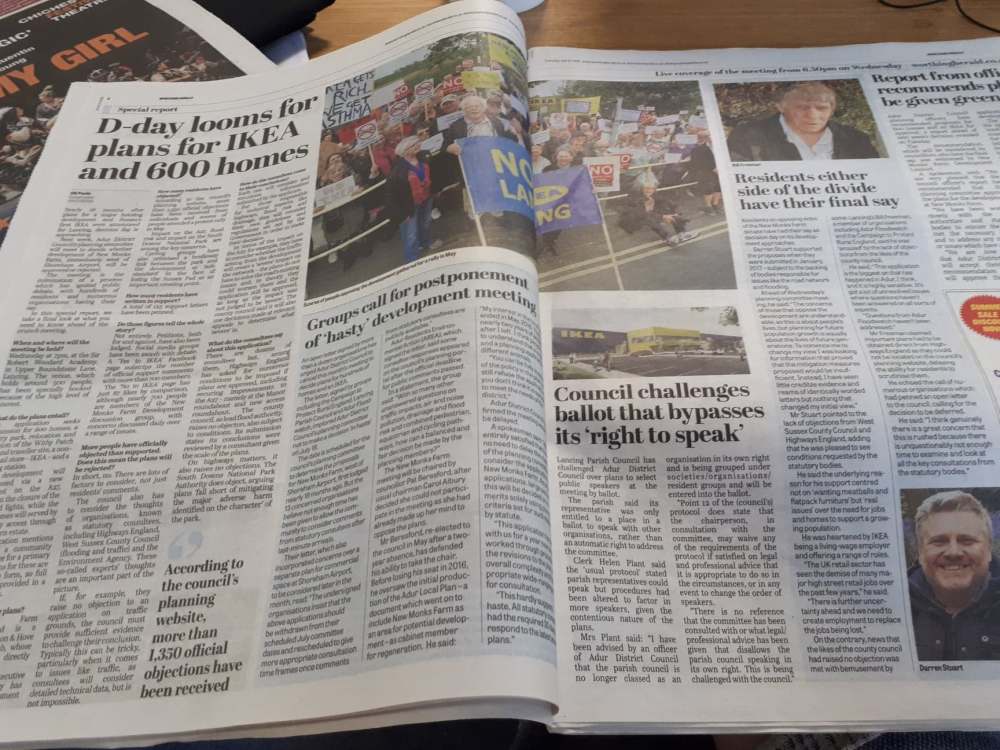 Most objections focus on things like parking and increased traffic. Often, local concerns seem very reasonable and blindingly obvious – for example putting an IKEA next to a road completely unfit for purpose like the A27 in itself should, you might argue, be enough to see those meatball-loving Swedes sent packing back to Scandinavia.

But for all the meetings I’ve been to, I need less than a hand’s worth of fingers to count the times when the people have fought this fight and won.

Not a numbers game

The system we have is, on the face of it, as bizarre as me rocking up to a meeting dressed in shorts and lime-green, neon trainers.

In theory, 10,000 residents could claim a hypothetical development will cause congestion chaos and make everyone’s lives a misery forevermore. They can turn up, quote Orwell, Darwin or Wilde in statesmanlike speeches. It’ll probably make no difference – if other important people disagree.

Known as ‘statutory consultees’, these people are so-called experts, from the likes of the county council, Highways England or water companies.

These chaps are key, because if – after studying a realm of technical evidence to assess and predict the impact of a development – they raise ‘no objection’ to plans, concerned residents are as good as stuffed.

If councillors were to side with residents over an issue which these experts have no issue with, they would need strong evidence to challenge their conclusions.

The harsh reality is us residents, unless we have goldmines in our back gardens, will struggle to produce the evidence needed to cut the mustard, even if our grasp of common sense appears to be all that’s required.

The experts have their own Government guidelines to follow and these seldom fall in favour of the humble resident.

With IKEA, objectors say the A27 is a mess, that it can’t cope now, let alone when thousands of visitors go flat-pack furniture hunting every day.

When the developer comes along and plans to plonk such a scheme next to Sussex’s longest car park, they aren’t expected to solve the problem. In fact, they can even make it worse, so long as the relevant expert body deems it won’t make it ‘severely’ worse.

Inevitably, residents’ definition of ‘severe’ and the national guidelines’ interpretation of the word are generally at odds.

Not a foregone conclusion but it’s an uphill battle

If you’ve got this far, you’ve almost certainly abandoned all hope like those entering Dante’s Inferno.

It’s not to say that fighting – and winning – a planning war isn’t impossible. It’s not. Not every issue rests so heavily on an evidence war with a pantomime villain consultee. Many things are a matter of subjectivity, the harm to a heritage asset versus economic benefits, for example.

The task is tough, though. The objection of an expert consultee on a major issue is a gem – but without their backing, councillors rejecting plans on some of the most common objections can end up in tears when the developer appeals and lawyers get involved.

The background I’ve explained hints at why comments like ‘represent your residents’ are wasted breath.

It’s why petitions may not be worth the tireless effort they always require and why that time may be better spent brushing up on planning law and local policies.

It’s why I wonder whether our system outwardly promotes public engagement but in reality stacks the odds against the average resident and actually over-promises on the importance of ‘people power’.

If a planning decision doesn’t go your way, the easy option is to blame those local people making the decision. They’re an easy target.

It’s all to easy to sit at a keyboard and make wild, defamatory accusations about them, with no evidence to back them up.

They might not always make the right call. They’re only people like us, with limited training but I’m sure that if they were not tied by the stringent system we have in place, some decisions may go a different way.

Yet if IKEA is eventually approved, I doubt we will reflect on the Government policies which are a crucial part of the issue and call on the powers that be for a debate on an alternative system.

It’s hardly a sexy topic, while blaming committee members for the decision is probably more politically convenient than tackling the bigger picture.

Perhaps we should take the tougher route for a change.