It’s been just over a week since we began our second attempt at the Milk Ladder – and on an allergy front it’s been a super-busy period.

We kicked off with a Heinz apple biscotti, on the same level as the malted milks he coped fine with before our aborted attempt at the ladder before Christmas.

The next morning wasn’t promising. Usually smiley, happy Albie was replaced with screaming Albie, who later produced what was described to me as ‘a corker’ of a poo which, impressively, leaked onto his trousers but not his vest!

At this stage, the Milk Ladder journey wasn’t looking promising. But rather than the continuous explosions which characterised previous reactions, this proved an isolated episode. Perhaps he just had a bit of a tummy ache.

Persisting on level one of the ladder for a bit, he’s since wolfed down a couple of malted milks and been perfectly content.

Off to see the dietitian

Albie is under a dietitian because of his low weight and his allergies. It took a while to get him referred but it was well worth it when we did.

More than anything, it’s helpful to have an expert to discuss concerns with and guide us through what has been a tricky journey on the ladder.

Friday’s appointment also provided a weight update. After some conversion confusion, we worked out Albie was now up to about 17lb 11oz, a few ounces higher than a couple of weeks ago.

We recounted our pre-Christmas nightmare encounter with the muffin, which halted our progress. Bad reactions along the way can be very worrying, especially if they result in such extreme changes in the norm.

But despite this, we were reassured that a reaction doesn’t always mean you need to stop. We were told that it was important to test Albie’s system, so in our case we would have been safe to try again a few days later.

As much as caring for a baby with food allergies can be worrying, it can also be incredibly confusing.

When Albie reached the age of one, his prescription milk and omeprazole medication were stopped.

From that point our milk of choice was oat milk. This didn’t appear to be a concern at his last appointment. He takes a daily dose of vitamins, which goes a long way towards replacing what he loses from formula milk.

But following Friday’s appointment, we were advised to start him back on a prescription milk.

This may help him gain weight more effectively than the oat milk, while the type suggested could also aid his Milk Ladder journey.

The selected milk is Nutramigen, which you can find out a bit more about here.

While this is fine in theory, time will tell how effective it will be. Albie isn’t a big drinker, unless it’s water or a weak brew (a very occasional treat!) and in our experience Nutramigen smells – and probably tastes – like mouldy fish and chips.

The poos he produced when he was on it before prompted me to throw away our nappy bin, as it couldn’t contain the vile smell!

It’ll be a miracle if he even sniffs then stuff…

Any parent will report vaccinations as a particularly unpleasant ordeal.

And after today’s trip to the allergy clinic, Hanna reported the process as even worse.

I try to attend as many of Albie’s medical appointments as possible. Today I couldn’t, as I had an important conference call at work with colleagues in Leeds. From Hanna’s account, I think I would have preferred a physical trek up north to a couple of hours at Worthing Hospital!

The test identified whether Albie had any immediate reaction to the major allergens, which would indicate whether things like egg might lead to a really dangerous situation.

Aside from most nuts, we were already fairly certain there wasn’t anything which would provoke anaphylaxis. Albie’s encounters with cow’s milk and soya prompted what’s known as a ‘delayed’ reaction – tummy problems and the like.

His avoidance of egg prompted concern with his jabs, as some include egg proteins, but he suffered no ill effects minus being extremely angry that a nurse had the cheek to poke him with a pointy, object. 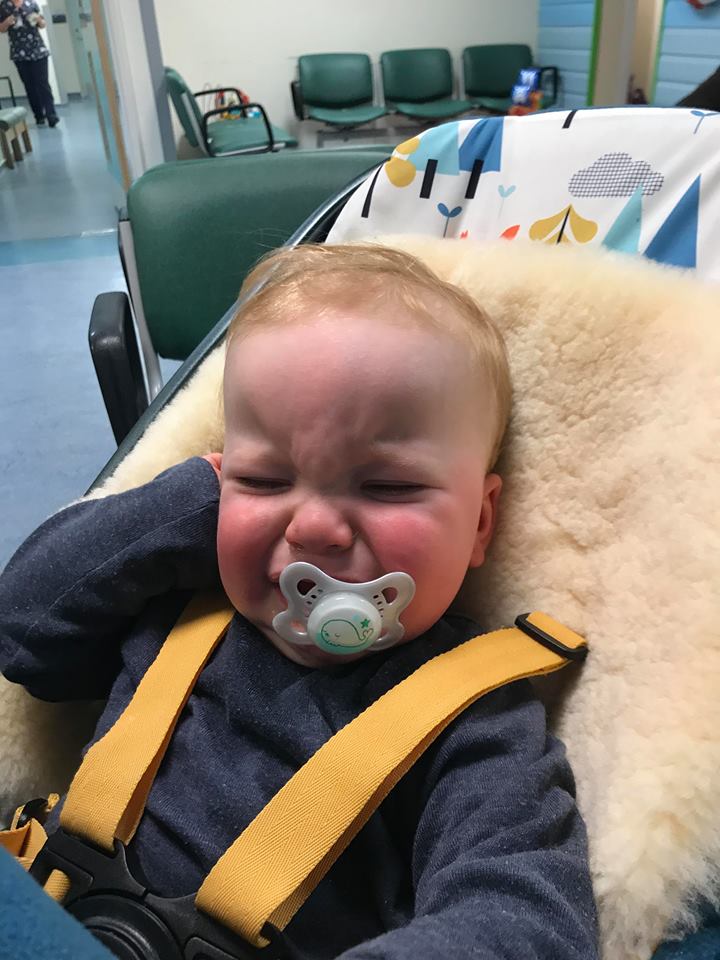 No pain, no gain

The allergy test involved liquids containing traces of everything from milk to soya, egg and various nuts being placed on his arms. A histamine was also used as a control – something which would prompt a skin reaction so the effect of the allergens could be clearly compared.

This web page seems to describe the scratch test Hanna reported quite well, though I wouldn’t recommend explaining to her – or Albie – that the scalpel used to make a small break in the skin to allow the allergen drops to seep in was ‘painless’.

It’s no surprise that Albie wasn’t a fan of the nurse making the numerous ‘scratches’ and a photo of him in angry baby mode I received while at work confirmed it wasn’t his highlight of the day.

Albie showed no signs of an immediate reaction to any of the allergens, which was really positive.

This doesn’t mean he’s not allergic to cow’s milk but it does confirm any reaction he suffers shouldn’t turn into a life-threatening situation.

His ‘delayed’ symptoms which caused him so much suffering in his early days still suggest an aversion but one which we should be able to overcome in time through persistence with the Milk Ladder.

What this does mean is that our avoidance of egg as a precaution can be partially lifted, and we can gradually begin to introduce him to the chicken by-product like we’re doing with the Milk Ladder.

That definitely doesn’t mean we can crack on with two boiled eggs and soldiers in the morning but stuff with baked egg in it is now a goer.

And on the Milk Ladder front, it will make progression a lot easier, as a lot of the foodstuffs on the higher levels unavoidably contain egg.

We’ll be continuing on stage one for the next couple of weeks, building up the amount of malted milks we give Albie, as well as introducing a small amount of baked egg.

* Please consult your doctor/dietitian before any changes are made to your child’s diet. Albie’s experience and pathway is individual to him and it’s possible different approaches will be required.